With the help of the internet, academic fraud has persisted as an alarming issue within the workforce. Diploma mills — fake schools offering fraudulent degrees in exchange for compensation — have become much more accessible in the digital age. Additionally, the United States currently remains one of the most popular sites for the diploma mill industry, with more than 1,000 operators in 2011, according to CBS News¹. Consequently, the abundance of bogus degrees and certifications presents dangers not only to employers, but to the general public as well.

In one particular case, a 35-year-old woman applied to Brown Mackie College in Albuquerque, New Mexico, falsely claiming she had earned a “master’s degree in nursing from Georgetown University and had previously taught a pediatric nursing course at the University of New Mexico,” according to a recent indictment published in the St. Louis Post-Dispatch. Although she had never been licensed as a registered nurse in any state and never graduated from nursing school, she was hired in 2015 as a full-time instructor in the college of applied science in nursing with an $80,000 salary.²

The United States currently remains one of the most popular sites for the diploma mill industry, with more than 1,000 operators in 2011.¹

How can employers prevent academic fraud, thereby minimizing financial risks and expenses and helping to ensure public safety? With its Verification Services, including DegreeVerify and GradVerify, the National Student Clearinghouse serves as the foundation for reliable information. Organizations using the Clearinghouse can rest assured with access to verified student degrees, certifications, and enrollments.

While the digital age offers a myriad of benefits, it also has potential to pose various threats. In response, the Clearinghouse’s resources provide relief with its verification services, vital tools needed now more than ever. 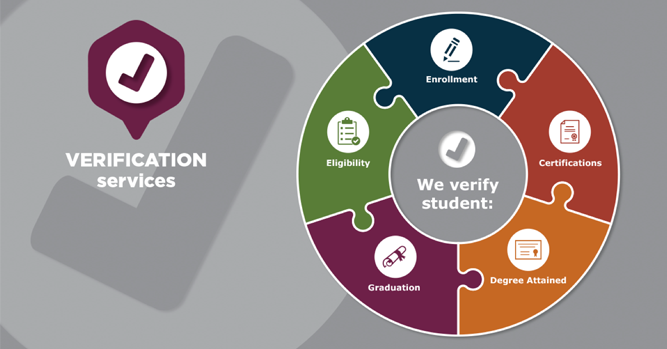 A Behind-the-Scenes Look at Pending Verifications